Once information is digitized, the boundaries between media disappear - Nicholas Carr

Today I'm thinking about Chapter 4 of The Shallows, our upcoming bookclub read.  As I read this chapter I reflected on my own journey using the internet with students and how during a few short years it matched the history of modern media played out over centuries.  The first web pages I ever made with my class, back in 1995, were basically made up of just black text on a white web page as the students typed up their stories and saved them on floppy disks and our ESL teacher uploaded them to a Dutch server that hosted our work.  This wasn't so different from the way the students would have written their stories for printing out on paper.  This is what the first web pages we published looked like: 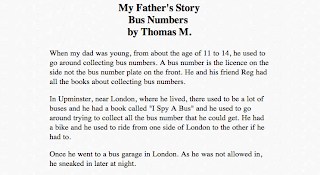 Later that year we discovered how to add photos (at first just black and white photos) and our site looked like this:

It's very basic, but at this time in 1996 our school didn't have an internet connection and we didn't have any web authorizing or design software so it was a matter of just adding simple codes to what we were doing.  As we made more pages we experimented with scanning in pictures the students had drawn, we took more photos and we found images online that we wanted to use too.

The next thing we were able to add were sound files.  This wasn't until a couple of years later when students were doing a project called Pole to Pole, based on the Michael Palin TV series, where each group of students chose a different line of longitude and travelled along it from the North Pole to the South Pole, investigating the countries on the way.  We found freeplay midi files that we could add on based on the music of the countries the students were "visiting".

The next thing my students started doing was making their own movies, using iMovie.  Again we were able to add these by putting them on the school web server and just making simple links to these.  It wasn't possible to embed movies at that time.

When I moved to Thailand and wanted to phone back to Europe I started to investigate Skype.  I didn't yet see the possibilities of using it with students, but I was grateful that it allowed me to keep in touch with my family.  I remember being told I couldn't install Skype on my computer at work as it would "bring the whole network down".  I tried it and it didn't so my next step was to get a web cam and balance it on top of the computer so that the people I was talking to could see me too.  As well as my computer I had an iPod for listening to music, a television, a music centre that contained a radio, a mobile phone and a camera.  I had no idea what was around the corner and that all these technologies were soon to combine in a smartphone.

These days I read that the average American spends at least eight and a half hours a day looking at a screen of some sort - a television or a computer or a phone.  Clearly the time we have left to read print publications is now much less than previously - yet in general the trend is that we are all reading more than we did 20 years ago, before the internet - it's just that we're reading most of it online.

In the past the media we used was very specialized - text and images were found in books and magazines, but not sound or moving images.  TV and cinema dealt in visual media, but not really in text.  Radio and  telephones transmitted sounds.  We used a pocket calculator for our maths and looked up information in encyclopedias.  However with the digitization of information, and with access to all this information on a smartphone, the boundaries between the different media have dissolved as many different kinds of information can be accessed and combined on a single device.

The journey from the printing press to being able to access multi-media on a device small enough to fit into your pocket took many hundreds of years.  My 11 and 12 year old students from 1995 are now in their late 20s.  In just 15 years they have travelled through the whole history of media - from handwriting their work for just me to read, as people did before the days of printing, through typing up their work and publishing it for a larger audience, through audio and video to a point where they are now able to create mashups of many different types of media and to share what they have created with the whole world.

It makes me wonder - what is coming next?

Posted by Maggie Hos-McGrane at 7:57 PM

Email ThisBlogThis!Share to TwitterShare to FacebookShare to Pinterest
Labels: The Shallows