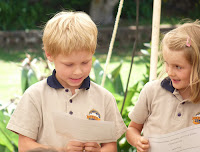 Alfie Kohn writes that positive comments should be offered in private.  Often, however, public award ceremonies are held as a way of "recognizing excellence".  Over the years as a parent I've been to many such ceremonies for my children, both to reward excellence in sporting as well as academic achievements.  Kohn asks:  why is it importance that excellence be recognized?

Here are some of the motives he believes are behind public praise:


In all the above cases, Kohn argues, private comments that promote intrinsic motivation are more effective.

Further on in Chapter 6 Kohn writes about the work of Rudolf Dreikurs whose studies have shown that evaluative comments are often unnecessary.  He writes:

We can be less judgmental and controlling - and in the long run more effective at promoting self-determination and intrinsic motivation - by simply acknowledging what a child has done.  Just pointing out an aspect of a child's essay or drawing that seems interesting (without saying that it's nice or that you liked it) will be sufficient to encourage her efforts.

I have thought about this a lot this year as I have been posting comments on students' blogs.  Often I have tried to describe what the student has done and to show that I have noticed one of two aspects of it that make it special or different from the others.  Hopefully this lets students know that this is something very unique and individual that they have done and that I have noticed it and commented on it - and that this is more encouraging to them than cheap and easy praise.  Actually commenting on a blog post in some ways public praise - as anyone can read it - but it's done without a lot of "ceremony" and the student can read the comment by himself or herself privately.

Posted by Maggie Hos-McGrane at 10:28 PM