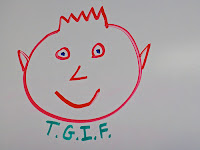 Why do so many people say "Thank goodness it's Friday"?  It's almost as if the time they have spent working during the week is over with and they can get on with the part of their life that they find enjoyable.  Recently I've also heard people say "I work to live, I don't live to work", which is similar in a way. Yet if you have a job you love, aren't you also thinking "Thank goodness it's Monday"? When I lived in both Amsterdam and Thailand I worked in schools where I looked forward to going in to work on Monday just as much as I looked forward to the weekend on Fridays.  These schools were vibrant and exciting places where every day was different, where I was continually learning new things and where I knew I was doing a good job which was valued and where the people I worked with were innovative educators and leaders on the cutting edge of education.  I feel blessed that I spent over 20 years working in such dynamic places.

I'm now at Chapter 10 of Punished by Rewards by Alfie Kohn, which deals with workplace motivation.  The first part of this chapter is about how compensations systems can act as barriers to quality, productivity and motivation.  Daniel Pink has said the best use of money is to "pay people enough to get the issue of money off the table ... so they are not thinking about the money, they are thinking about the work." and that what really motivates people is autonomy, mastery and purpose.  Alfie Kohn also writes the same thing:  "Pay people generously and equitably.  Do your best to make sure they don't feel exploited.  Then do everything in your power to help them put money out of their minds."  Kohn writes that the big problem with money is the way it is used to control people.

Further on in the chapter Kohn writes about evaluation and how this too can be a demotivator.  At one school I remember we changed the term "teacher evaluation" (which implied making a value judgement about someone's performance) to "teacher appraisal" which apparently was a more positive term to use because it contained the word "praise" instead of the word "value".  In this school we were appraised on our goals, most of which we set ourselves.  I've never worked in a place where evaluation or appraisal has been linked to pay, but I have worked in places where it has been suggested that such a compensation scheme might be introduced.  However what I have noticed is that any evaluation or appraisal scheme, regardless of what it is called, seems to generate a climate of anxiety and fear among teachers being appraised, which could indicate that it is being used for the wrong purpose.

Alfie Kohn addresses some of the reasons why schools and companies have such systems:  some are used to determine pay, awards etc.  Some may be introduced to try to make employees perform better (fear or negative evaluation, hope of positive evaluation), some may be to decide who is doing a good job so that they can be promoted to something better, some may be to provide feedback, discuss problems and help employees to do a better job.  Of those, it seems only the last reason is likely to be useful.  In the case of promotion, Kohn argues that employees are made to feel like failures if they are not upwardly mobile - or perhaps if they choose not to be.  Kohn argues that appraisals of someone's performance in their current job are no real indicator of how they will perform in a different position and he also writes that performance is best judged by the evaluation of one's peers and not one's superiors.

Evaluations and appraisals can be useful ways of helping someone to do better work, however, especially when this involves a dialogue and not a judgment.  They are also useful when they are ongoing, rather than just a once or twice a year observation.  However the most interesting part of the chapter that I've read so far relates to the relationship between the two people involved - and this is the very reason why I feel it necessary as a facilitator or coach to avoid being in a position where I have to judge or assess a teacher's IT skills.  Kohn writes that it is foolish to have someone "serving in the self-conflicting role as a counselor (helping someone improve performance) when at the same time, he or she is presiding as a judge."

The crux of this part of the book is that it is changing the way that employees are treated (as opposed to paid) that boosts productivity and motivation, which brings me back to the title of this post.  As a teacher I have worked in a number of different schools in different countries and I have definitely worked in situations where teachers had more of a TGIF attitude than a TGIM one.  To combat this, Alfie Kohn gives 4 guidelines as to how people in administrative positions can encourage more motivation in the workplace:


Watch - look for problems that need to be solved and help people solve them.
Listen - listen to people's concerns, imagine how the situation looks from their point of view.
Talk - provide feedback, encourage people to reflect on what is going well, what needs to improve and how this can change.
Think - about whether the current climate is based on extrinsic motivators and controlling people's behaviors.

Kohn goes on to write about the 3Cs of motivation - collaboration, content and choice.  I'm going to reflect on these in an upcoming blog post.

Posted by Maggie Hos-McGrane at 7:41 PM