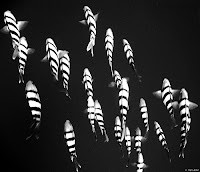 Last week I did a one-day middle level leadership workshop with Bambi Betts.  I found it really useful and am still mulling over a lot of this, especially Bambi's statement that:


The job of enabling learning happens at the middle level.

She pointed out that middle level leaders have huge power because the day to day classroom activities, the curriculum planning and the assessment mostly rest with these people.  We started the day with a discussion about our biggest concerns associated with our leadership role.  I'm sure she hears the same issues at every school she visits, such as the problems of micromanagement and defining our parameters of power, the conflict we experience between inspiring teachers and managing them, personal v- professional relationships and in particular in international schools the transient nature of teams and how recruitment can seriously affect group dynamics.

As I was reading further around the subject of leadership I came across an interesting article from the Economist from last year.  This article was looking at collective behaviour and quoted a study by Dr Iain Couzin of Princeton University who has discovered that leadership (in fish) is extremely efficient:  the larger a shoal, the smaller the proportion of it that needs to know what is actually going on.  He claims that having too many leaders results in confusion - which often applies to humans too - how often have we been in situations where we've heard the expression "too many chiefs and not enough indians"?  In a couple of places where I've worked employees were completely mystified by (or resentful of) what the leaders actually did with their time each day - this was not simply the result of a lack of communication but also a perceived sense of inefficiency or even incompetence - and I've noticed this attitude seems pervasive in places that are very "top heavy".  Dr Couzin also noticed that the best outcome for the group seems to depend on most members being unaware and simply taking their cues from others.  He has found this phenomenon applies to all sorts of different situations, including voters in a democracy.  In fact he writes that a group's "intelligence" depends in part on its members' ignorance - which I find rather worrying!

The Economist article however questions some of Dr Couzin's findings.  It asks:  what happens in organizations where ignorance is not bliss - where in fact the leaders themselves turn out to be sharks?

Ian Jukes, one of the Directors of the 21st Century Fluency Project, started a group called the Committed Sardines - his idea is that a small group of committed people can change the world (or in this case schools).  He explains that a school of sardines can turn almost instantly, compared with, say, a blue whale that can take a long time to turn around.  He compares visionary teacher with the sardines, schools with the blue whale.  He points out:

Seth Godin writes about  "leadership and followership".  He writes about becoming a leader:  "You don't do followership for years and then someone anoints you and says "here".  In fact it's a gradual process, one where you take responsibility years before you are given authority."  I think if you want to become a visionary leader, it can be good to spend some time as a "committed sardine" rather than a "shark".

Posted by Maggie Hos-McGrane at 12:04 AM