In October last year I had a conversation on Twitter with Tom Barrett which changed my life.  Tom had written about why he turned his back on teaching.  He talked about the importance taking charge of the situation and making positive change happen.  He suggested I read Linchpin, which I did.  When I'd moved to Switzerland from Thailand a couple of years before that I'd assumed that this was "coming home" - that I'd be back in Europe for good.  During the autumn of last year I struggled with this idea.  I knew all the reasons why we'd moved back were still valid - an elderly mother and son at university in the UK, a daughter who would be going to the UK herself in a year's time.  What I came to see was that my lizard brain was telling me to stay safe, to put up with a bad situation because I was "home".  Another part of my brain was telling me to stop selling myself short.  To go out again and find a school that was better.  To find administrators who would encourage me to grow.  To stop committing what one of my colleagues described as "professional suicide" by staying put.  To do something.  To move on.  Even if that meant moving out of Europe again.

There is a happy ending to this story.  I am moving on - to India.  I am inspired again.  I'm a little scared too - leaving is bittersweet (my daughter used this same word when she wrote about her feelings in the yearbook).  I have received the most overwhelming support from my friends, my colleagues, and many, many people who have never even met me.  I'm humbled by how many people believe in me and in what I can do given better circumstances.  Seth wrote the Linchpin Manifesto.  Inspired by this, I wrote my own. 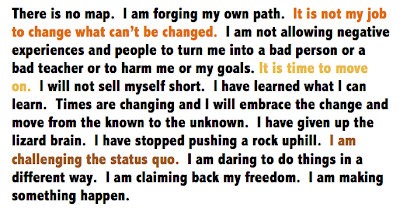 Posted by Maggie Hos-McGrane at 1:34 AM