Not so 21st century skills? 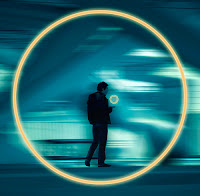 A few months ago I was talking with my brother about the pace of change.  He was arguing that innovation actually declined during the 20th century - that people were much more inventive at the start of the century than at the end.  I found this hard to believe as it seemed to me that the pace of change was actually increasing but then I started to investigate the facts behind this belief a little more.

Last week I was talking with a class of Grade 5 students about the scientific method.  Students were asking about cloning and they got onto talking about the possibilities of teleporting.  I told them that it might be possible to do this in their lifetime - what seems unbelievable today, is tomorrow's reality.  Back in the 1960s and 70s my brother and I were Star Trek fans.  The things that we saw on these programmes were definitely, in those days, science fiction, but these same things are now in general use.  For example we could see the characters communicating using devices that bear a remarkable similarity to flip phones, there were medical scanners, translators, things that resembled GPS devices, ear piece communicators and so on.  All these things, that to us were very futuristic, are now simply ordinary - so who's to say that in a few years teleporting won't also be a reality?

To prepare for my next conversation with the Grade 5s, I started to research into the top inventions of the 20th century.  These are listed on many websites and included the following:  radio, television, antibiotics, the submarine, nuclear power, rockets, the automobile, the airplane, computers and the internet.  I started to think about when these were invented - were they in the first or second half of the 20th century?  Well the submarine was first invented in the 1880s, but only started being used around the time of the First World War.  The automobile also became a possibility for many after the invention of the mass produced Model T Ford in 1908.  The radio was invented in 1916 and the television in 1923 - even the colour television was invented in the first half of the century, in 1940.  The airplane was invented in 1903, antibiotics in 1928 and the technology behind nuclear power in the 1940s.  Looking at this list of the most important inventions in the 20th century, therefore, it seems only 2 of these were invented in the second half - the personal computer and the internet.

So what were the skills that led to all these important inventions at the start of the last century.  It seems they included creativity and innovation, critical thinking and problem solving, communication and collaboration.  Do these sound familiar?  Aren't these the very same skills that we are now dubbing 21st century skills? It seems that these skills have always been important, though then as now it's very difficult to teach them.  How do you teach creativity, or assess it, for example?

The PYP has a list of transdisciplinary skills that I think are important for any education system in any century.  These include thinking skills which are so important to creativity and innovation, social skills and communication skills that are vital for global collaboration, self-management and research skills.  These skills are important not just in the PYP programme of inquiry, but for all learning - both in the classroom and for life outside school.

Posted by Maggie Hos-McGrane at 2:18 AM