Throw yourself, new faculty of 2013 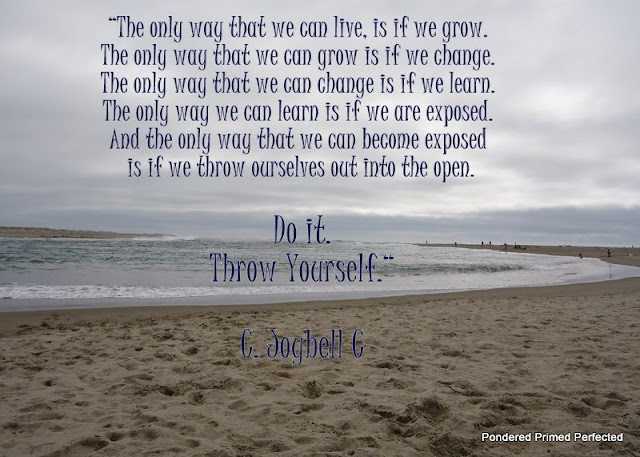 This is not Juhu Beach, but I suppose it could be.  At the 1:1 Institute for new faculty this past weekend this is the quote that they chose to represent their feelings about their move to India and to ASB.  They went through an interesting process to choose this quote and since I was a part of this I want to share this process with you.  But first, let me step back a bit.  If I was to look back to my arrival in India, what would my quote be?  Well, I guess it would be "Embrace India".  So I have done that and it is true:  if you embrace India, then India will embrace you.  There is not a single day, not even a single hour, when I have had second thoughts about the decision I made to move to India.  The country has given me a rich cultural experience, and the school has given me a rich professional experience.  I have grown as an educator more in the past 8 month than probably in the 5 years before that and I have grown as a person too.

Choosing the quote.  We were split into groups - I can't remember how many groups, but I would guess around 6 groups that had about 6 people in each group.  We were handed a set of cards to look through - each card contained a famous quote.  Apparently there were about 80 different quotations, spread out among the different groups.   As a group we had to choose our favourite quote, one that represented the feelings of the new faculty about their experiences at the 1:1 Institute and their hopes for their move to India.  There were some quotes we eliminated straight away, there were others that we discussed for a time, but eventually our group chose the one we wanted.

We stood around in a large circle.  A person from every group read out the quote they had chosen and the 6 quotes were displayed for us to look at again.  Then we could vote - but not for the quote our own group had chosen.  This one, by C. JoyBell C. was the one that got the most "thumbs ups", and by the way it wasn't the one that our group had chosen.

Later it occurred to me that I didn't know who C. JoyBell C. was.  I had to do a bit of research to find out more about her.  It turns out she's a writer of poetry and prose, but still quite hard to track down.  The photo above I got from one of her Facebook Albums.

So this is what I wish for our new faculty:  life, growth, change, learning and throwing themselves out into the open, because I know for sure that we will support you.  And while you are out there, please don't forget to embrace India.
Posted by Maggie Hos-McGrane at 10:30 PM