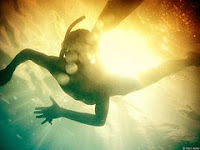 Having practiced the design thinking process with one of the other participants, we then set off to various locations around Detroit to try to answer an important design challenge:  how to help people to eat healthily when they choose to eat out.  We were given a food court and given instructions to go out and develop empathy.  This involved the following steps:

Before setting off I already knew there were 3 things I needed to know - why people decided to eat out rather than eat at home or bring a home lunch with them to work, why people chose that particular place to eat out, and what food they chose once there.  Once we arrived at the food court we wandered around and simply observed what the choices were.  There was a deli on the ground floor that seemed popular with 9 different varieties of soup and a pick your own salad bar.  On questioning the customers there we discovered that many shopped there because it was convenient - for example they worked in the building, or perhaps worked in a job that made it difficult to bring a home lunch to work (for example we chatted with a couple of lorry drivers who moved on to a different city every day of the week).  Another plus point for this place was that people could choose to make their own salads at the salad bar.  They had total control over the ingredients and how large a portion they wanted to eat as the food was charged by weight.   Also, there was no waiting for service - you simply served yourself and went to the cash desk to weigh your choice.  The customers who opted for the salad bar did mention that they thought that salads were a healthy option.

Another thing we observed was that junk food costs less than healthy food.  We saw mothers with children who opted for chili burgers for their children at another fast food outlet, and one of these mothers commented that she was motivated to come to this shopping centre because of the food.  Upstairs in the food court we noticed a Chinese take away, a Thai restaurant, a pizza and salad take away, and a place selling sandwiches and soups.  Many of these had "special daily menus" which were cheaper than the regular food.  For those on a strict budget these might be good options.

My colleague and I decided to try out portion size at one of these "special daily menu" places.  We were given free soup, free water and were able to split a lunch meal between the two of us.  The total price was $5.95 which was considerably less than our $8 each budget.  We had plenty of money left over to go back to the deli and buy fruit and even a salad - and after this still had money over.  (This was a big contrast to other groups who went to restaurants with $10 and found nothing at all on the menu that this would cover).  The Thai restaurant we went to allowed me to look into the kitchen to observe everything was freshly cooked for a minimum time, thus preserving the vitamins in the food.  We decided that this was a healthy and cheap option, and also felt it was environmentally friendly as we sat down to eat in the restaurant and so didn't use any packaging or plastic cutlery or drinking packages.  Everything we used was washable.

We had a great time interviewing people to find out their points of view.  For example we found a young man with chicken and chips who told us he didn't care if his lunch was healthy or not. We found others who thought they knew what healthy was, but when they told us their reasons for their choices it turned out that they had little understanding of planning a healthy meal.  We also discovered a couple of doctors, one of whom had brought a home lunch because he said he "didn't want to eat greasy", and yet his home lunch contained some items that were not particularly healthy.  His colleague was tucking into soup, cookies and drinking Red Bull.  When I questioned her about this choice she said that she actually tells people not to drink this as it is too full of sugar and caffeine, but that as a busy doctor this was the very reason she chose to do this as she needed to get through the afternoon clinic.  The doctors both mentioned that they chose to eat in the food hall because there was nowhere for them to eat at the clinic.

Once we returned to the HFLI we started to group our observations.  We wrote down all our thoughts about what we had observed using a Space Saturation protocol and through this 4 main considerations were observed from our mall diners:
After Empathy, the second stage in the design thinking cycle is Define.  This was as far as we got on day 1.  Define is to consider the unique point of view - it is a reframing of the problem grounded in user needs and insights and so gives us a clear picture from a mass of unrelated and often chaotic data.  Our task was to come up with a specific question that we could focus on.  To do this we needed to come up with several User-Needs-Insight statements about the people we had observed and interviewed and their needs.  Such a statement might be:

Lorry driver (user) wants to find a place where he can choose his own foods (needs).  His aim is to eat fresh food (insight).

So far this afternoon we  made a "deep dive" into the first 2 parts of the design thinking cycle.  Tomorrow we will continue with our design challenge and start to think about how to ideate, prototype, feedback and reflect on the design process.

Photo Credit: Hani Amir via Compfight cc
Posted by Maggie Hos-McGrane at 6:38 AM