Mindful apps for adults and children 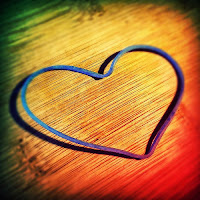 About a month ago I decided to try out some of the mindfulness apps on my phone that our school counsellor has been using with students.  As it's the Holi holiday in India this week, it seemed like a good opportunity to spend the week exploring a number of these apps - and since it's the holidays I also have the time to write a blog post about them.  I spent the week in Rishikesh, which is one of the holiest cities in India.  It's on the Ganges in the foothills of the Himalayas, and is famous as a centre for studying meditation and yoga.  The banks of the river are lined with temples and ashrams, and when we arrived it was the last weekend of the International Yoga Festival.   It seemed like a great time to explore a bit of mindfulness.

Those who know me will know that I really dislike flying.  I know it's totally irrational, and it's never stopped me wanting to go to places, but I hate the feeling of flying.  I was therefore keen to try out these apps, as two of them have specific meditations sessions for flying.  In the Headspace app, one of the free "singles" sessions is called On The Go, where there are 2 free meditations called Fear of Flying.  I listened to both of these at the airport while sitting down waiting to board and have to say I fell asleep during the second one (so I guess I must have been relaxed!) I played the second one again once I was sitting in my seat on the plane and fell asleep again.  My first reaction was that it seemed very effective.  The other app I used was Buddhify which has a section called Travelling and within that there's a 5 minute meditation called Flight.  This one is really interesting because you do it during the flight and have to concentrate on your breathing, and when you feel your mind wandering you ask yourself are you thinking about something that happened in the past (in which case you say the name of the departure city) or something that is going to happen in the future (in which case you say the name of the arrival city).  It's worthwhile to see which way your mind mostly goes when it starts thinking - past or future.

Over the past week I've explored four apps, including one for children, and I'm going to share some thoughts about them here. 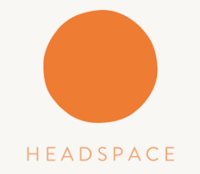 Headspace markets itself as your own personal trainer.  You can download the app for free and use the Take 10 programme for 10 minutes a day for 10 days.  That's a sort of introduction to mindfulness.  After that, apart from the free Fear of Flying solo sessions, you need to subscribe to unlock hundreds of hours of other sessions.  The aim is that you will become more focused, have less stress, sleep better and so on.  The app claims that mindfulness meditation leads to peace of mind and wellbeing, greater creativity and better relationships, as neuroscientists have discovered that after only 11 hours of meditation there are physical changes in the parts of the brain that monitor focus and self control.  It also activates the "rest and digest" part of our nervous system helping with stress management, and it promotes divergent thinking allowing new ideas to be generated.  Mindfulness also helps with filtering out of other mental processes during creative tasks, so those who meditate stay on task longer and make fewer task switches.  I can certainly see how this would be beneficial to many students!  In Headspace all the sessions are devised and narrated by Andy Puddicombe, who trained as a Buddhist monk in Northern India.   I found him extremely easy to listen to and really enjoyed my 10 free sessions - which no doubt I will go back and play again and again.  Several of the sessions include short animations which are useful introductions to the topic being covered that day.  Beyond the 10 days, however, you need to take on a monthly subscription.  A year's subscription works out at £9.99 a month and unlocks all the sessions including the 3 foundation courses, and the series on health, relationships, performance and so on.  My personal preference would be to pay one-time for all of these (however this costs around £300) so the jury is still out as to whether I will continue with the subscription.  One thing I did appreciate is this message on the website:


To help us fulfill our mission of improving the health and happiness of the world, for every Headspace subscription purchased, we will donate one to someone in need.

If you want to know more about Andy and Headspace, the video below is a useful introduction. 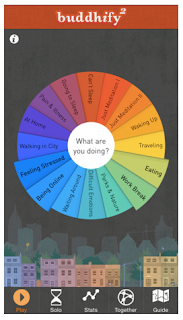 I used this app a lot during the past week - sitting by a waterfall, sitting on a bench at the Beatles Ashram, sitting on the balcony of my room, and also (as mentioned above) when flying to Rishikesh. This app has 80 guided meditations that are custom-made for whatever you are doing at home, work, travelling and so on.  This is a paid app and all the meditations are included in the one-time purchase price.  The app is beautifully designed and was created by Rohan Gunatillake, the Director of Mindfulness Everywhere, a Glasgow based company.  Ronan has written about 3/4 of the content of the app, but the narration is done by a variety of voices, male and female, British and American - I found some voices I liked much better than others.   The idea behind Buddhify is to use everything around us as a prompt for mindfulness, calm and compassion.

The app is designed as a wheel.  that contains over 11 hours of meditations divided into 15 different sections, including travelling, being online, going to sleep, being outside in nature and pain and illness.  In total there are about 80 different meditations that range from 5 - 30 minutes as well as a solo meditation timer and 2 sections called Just Meditation .  The app is designed for beginners and for people who don't have much spare time to think.  The app is priced at £3.99 (which makes it better value to get started with than Headspace). 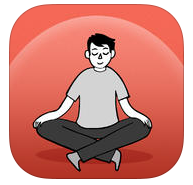 This is a free app that will help you develop and apply kindness and compassion in your daily life.  It involves 3 steps:

To begin you answer a series of questions about how you are feeling mentally, physically and emotionally, and the app then suggests several meditations that match what you currently need.  There are lots of different meditations and for several of them there are choices of the length of meditation, for example with Mindful Breathing you can choose a 3, 5, 10 or 20 minute meditation.  There are numerous free meditations and also some you can pay for (the cost is cheap - less than £1 for 3 new meditations on a particular topic), and the paid meditations help fund the in-school, after-school and summer school programmes for teens run by Tools for Peace.  There is also a self-meditation timer which involves you signing up with an email address.  The timer can be set for 1 minute through to 1 hour.

The app seems to be designed to be used in schools.  It is designed to develop skills that support academic and professional achievement and to promote more positive interactions and relationships through learning to deepen your awareness of your thoughts and emotions and to recognize those feelings in others, to settle yourself down and manage your emotions and reactions, and to approach people and situations from the perspective of kindness and compassion.

The app is designed by Tools for Peace, an organization that inspires people of all ages to develop kindness and compassion in everyday life.  Founded in 2000, TFP has partnered with over 20 organizations, universities and schools, and continues to strengthen and support emotional and social intelligence as well as academic success.   You can find out more about the organization by watching the video below: 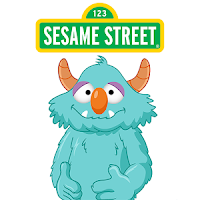 This app is aimed at young children, probably up to Kindergarten. The aim is to develop skills such as self-control, problem solving and persistence.  Children tap on the app to help a Sesame Street monster to calm down and find solutions to his problems.  There are 5 activities which young children often find difficult:  getting dressed, saying goodbye to a parent when arriving at school, building with bricks, taking turns and going to bed.  There is a parent section built into the app.  Parents can personalize encouraging phrases that their child will hear as they use the app.

Have you tried any of these apps yourself of with students?  I'd love to hear how you got along.  Do you have any other mindfulness apps that you would recommend?