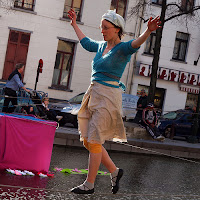 This is the second post about gender bias at work.  After yesterday's post I started to think about how this might apply specifically to schools.  I've worked in both primary and secondary schools, and I began to count up how many of these schools had a male head of school, as opposed to a female.  I was especially interested in this trend in primary schools where the majority of teachers are women.

When working in the UK I was a secondary teacher - both schools I worked at had a male Headmaster.  In my years in Amsterdam, the school had 5 Directors - of these 4 were male and 1 female.  In Thailand, Switzerland and India all the Directors/Superintendents have been male. Looking specifically at the primary sections of those schools, in Amsterdam I worked for 1 male Primary Head and 1 female.  In Thailand the Primary Head was male.  In Switzerland the Primary Head was female.  In India, both Primary Heads have been male.  Let's also think about the %.  Currently in my school there are 44 teachers in the elementary school, of which 4 are men and 40 are women.  You would think therefore that statistically women were 10 times more likely than men to become a head of school, but clearly this is not the case.

The second video in the series What Works for Women at Work,  focus on the issue of the tightrope. Women often feel they have to navigate between being perceived as too "masculine" where they are respected but not liked, and being too "feminine" where they are liked but not respected.  Masculine qualities are seen as being assertive, competitive and ambitious, whereas feminine qualities are things like being nice, helpful and modest. Looking at the person doing a particular job, we often make biased assumptions which work to the disadvantage of women, particularly in education, where they may be seen as being warm, supportive, nurturing and caring. When women act in more "masculine" ways that don't match our assumptions, we often have subconscious, negative feelings towards them. However by recognising these biases we are able to address them.

When people think of a successful leader they are likely to think of this person in terms of someone who is assertive, competitive and ambitious (the "male" qualities).  In order to get ahead women need to be seen as both competent (male) and likeable (female) and this works to the disadvantage of women's careers because women often face pushback for the same behaviours that are admired in their male colleagues.  What is called "assertive" in men, for example being direct and outspoken, is often called "aggressive" or "abrasive" in women. While men are applauded when they discuss their successes, women are frequently seen as lacking in modesty when they do the same.  Expressing anger or frustration can also increase a man's perceived status while it decreases a woman's.

In the video below you'll see Joan William's suggestions for dealing with walking the tightrope at work.  She suggests: