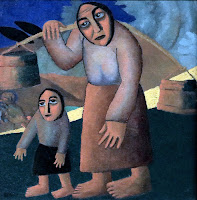 This is the first of 4 posts about women in leadership, specifically about the Women in Leadership session I attended at the NESA Conference last April where the videos by Joan C. Williams were shown and discussed.  Joan is the co-author, with her daughter Rachel Dempsey, of What Works For Women at Work:  Four Patterns Working Women Need to Know.  This post is about the "prove it again" bias against women, where women's performances at work are undervalued and where women have to provide more evidence of competence than men to be perceived as equally competent.

Williams mentions that 2/3 of the women she interviewed had encountered this bias, where men tend to be judged on their potential but women on their performance, which means that women often lost out on promotions as they are seen as risky.  In addition, women's mistakes are noticed more and remembered longer.  Whereas men's successes are attributed to skill, women's are more likely to be put down to luck.  Women also experience polarised evaluations, often being rated much less competent than men.  There'a also a very common pattern that emerges in the workplace called the stolen idea - an idea that is overlooked when a women states it, but which is taken up immediately when later on a man says it.

Strategies for dealing with the prove it again bias include;

And now here's the first video: