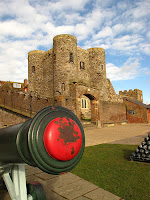 On Sundays I meet up with a group of teachers from a number of different institutions for Cognitive Coaching.  Yesterday we were talking about why some school initiatives don't stick.  For example when I first came to India huge numbers of people were being trained in the Data Wise approach.  I even blogged about this back in September 2012, and I was excited by this approach.  However I didn't use it much myself and though there seems to be a revised interest in data this year (we are currently doing data inquiry cycles) compared to the huge amount invested in training, there's not much current impact (most of the teachers trained have already left).  The following year it was Critical Friends.  Again I was part of a group, lots of people were trained, but now there are no critical friends groups left at school, and again this initiative has died a death.  Following on from that we've had Responsive Classroom, Adaptive Schools and Cognitive Coaching.  As one of our group said yesterday, "seems like every time another bandwagon comes along, we jump off the old one and onto the new one".  And what a waste - of human talent, of PD money, of the potential for making a true difference by integrating one of these deeply into the culture of the school.

So then one of us asked a question:  why do we do this?  What's the purpose of all this new innovation?  Of new initiatives that are invested in heavily but which are not implemented long enough to have teachers reflect, iterate and really make a difference.  All of these initiatives are very worthy - all have the potential to make a huge difference to student learning - so why aren't they sustained?  We talked about the fact that some people just want to make their mark by bringing in something new (good for adding on a CV as well).  We talked about the fact that this could be a marketing policy (see how many things we are involved in), or a way of attracting new teachers.  Certainly our PD is second to none.

And then one of us talked about Jim Collin's advice to fire bullets before cannonballs.  This concept comes from Collin's book Great by Choice.  He writes that first you fire bullets (low-cost, low-risk) to figure out what will work - basically you take small shots.  Then once you know you have hit your target fire a few more - just to make sure this is not a coincidence - and then finally bring in the cannonballs: concentrate your resources into one big bet to get huge results.  The ability to turn small proven ideas (bullets) into huge hits (cannonballs) counts more than the sheer amount of pure innovation.

So then I started to think about this business idea in terms of schools.  The fire bullets before cannonballs concept can also be applied to looking at innovation in schools.  Collins writes that innovation is not what distinguishes companies that thrive in tough times from companies that fail.  In fact he noticed that companies that survived tough times were often less innovative than their competitors that failed.  Basically, you shouldn't embark on a large, risky project until you have proven you can hit the target with smaller, less risky projects, that let you figure out what works and what doesn't.

This was the beauty of having an R&D department.  Should we have the students bring in any mobile device for BYOD?  We did a study in 2 classes to determine which was the best device for student learning (it was the laptop).  Should we have students use a second mobile device?  We did a year-long study on that as well in just 3 classes.  What we learned from R&D was this:  we need to try something out and then evaluate it when it's over.  We need to ask the tough questions:

But even more important in a school we need to ask what is the impact on student learning?

This post has been some time in the making.  I've been thinking this idea through constantly since last month when a former R&D member shared this quote from Carl Glickman with me (and which I'm sharing again now because all of my thinking around this issue was stimulated by this one quote):

It is irresponsible for a school to mobilize, initiate, and act without any conscious way of determining whether such expenditures of time and energy are having a desirable effect. This sounds obvious, but most schools move from innovation to innovation, expending great amounts of time developing new curricula, learning new practices, and acquiring new material and equipment. Then, after initial enthusiasm has passed, they have no sense of whether these efforts helped students.

I think we have to be brave and ask the tough questions about what we are doing in schools.  Are we firing bullets or cannonballs?  Because if we are firing cannonballs and they are not hitting their target then we will run out of gunpowder quickly, and then we will die.  Our students don't get a second chance when we make the wrong decisions or jump on the wrong bandwagon.  It's their future we are talking about, and their future is precious.

Email ThisBlogThis!Share to TwitterShare to FacebookShare to Pinterest
Labels: Innovation