Our Grade 3s are in the middle of their Where We Are in Place and Time unit of inquiry.  Their central idea is Exploration leads to discoveries and develops new understanding.  A few weeks ago it seemed like the focus would be on explorers throughout history with the idea of perhaps introducing students to timelines, then as we began our planning it seemed that we started to focus more on exploration of anything that was unfamiliar in order to learn more about it, and to the idea of discovery as coming to an awareness of the potential of a something.  Our focus had shifted from the past to the future!

At our collaborative planning meeting today we discussed our learner outcomes - that students can identify and explain why people explore and can understand how exploration leads to discovery.  Today we were discussing our summative assessment of this unit, which is that the students will explore four places in the local area to determine which are best suited for an end of year party.  Each of the four classes will divide up into four groups and each group will make an excursion to one of the four locations and they will present their findings to the class in order for them to make a final decision as to where to go.  They will need to prepare what criteria they are looking for and collect information about the place, such as photos and maps.  Once they are back at school each of the groups will decide on how to present this information to the rest of the class - I decided I would let them have a totally free choice in how they use technology to make this presentation - anything they decide on I will support.  Actually I had to say this twice because I was amazed at how exciting this sounded:  Any presentation tool they decided on, I would support - it would be entirely that group's choice.  (It felt so liberating and empowering to say that, it feels just as incredible to write this now - I am so, so proud of the Grade 3s for getting to this point this year). 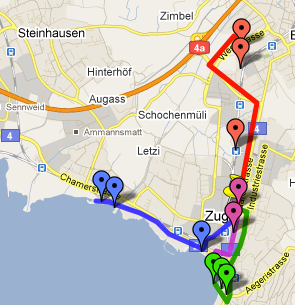 Straight after this meeting one of the classes came down to the IT lab to learn how to use Google Maps.  The teacher had decided she would explore the local area with the students on a map.  We had come up with 4 possible routes and marked them onto the map with different coloured lines.  The students were divided into groups and each group explored a different line.  The task was that they had to click on the pegman and drop him along their line, look at what was there and then add a placemark and write what they could see, what they thought and what they wondered about.

The students acted very much like real explorers as you can see by their comments below.  One group said "I wonder what the name of that mountain is."  This led us onto a discussion about how explorers often called things they discovered such as mountains after themselves.  In that group a girl from Egypt was able to share a discussion she had about how Alexandria in her country was named after Alexander the Great.

It was a very successful session in the lab, and we have now decided we will build on this by having the students make another map themselves.  The students will all go to an unfamiliar place in the world and explore it.  We talked about how today we don't actually need to go to a place to explore - we can do it on the computer and then decide if it is somewhere we actually want to go and visit.

Other blog posts about Visible Thinking Routines and my personal goals this year:
I see, I think, I wonder ...... about art
Think, Puzzle, Explore
I used to think .... now I think ....
Looking Forwards, Looking Back - Tying Professional Development in with Professional Goals
Visible Thinking Routines to introduce G3 students to blogging
Posted by Maggie Hos-McGrane at 11:06 PM