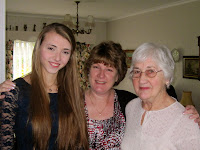 My mother prefers to talk on a landline.  She has a mobile phone but carries it for "emergencies" and has never sent a text message or an email or used a computer and she's never even heard of Twitter.  I use a mobile phone all the time, but mostly for texting, taking photos, accessing information and sometimes for listening to music.  When I speak to my mother I Skype to her telephone.  I send a lot of emails.  Twitter is my lifeline - I use it to communicate with hundreds of other educators daily.  My daughter doesn't use her phone as a phone at all.  It's simply a mobile computer that she uses to send thousands of texts every month, to access her Facebook account and to let all her friends see where she is.  She only uses email to send assignments to her teachers and thinks Twitter is pointless.  Her Skype is on all the time and she's constantly video chatting with friends in other countries - these friends are so visible to us that it often seems like they are living in our house too! We're three different generations and we communicate with each other in 3 different ways.

Today I was reading Welcome to the iGeneration in Psychology Today.  This great article by Larry Rosen outlines the different characteristics of the different generations.  My mother, born before 1945, belongs to the Silent Generation (she isn't silent, but she doesn't often use technology to communicate).
Baby Boomers are those born between 1946 and 1964 - I'm one of these.  They prefer face-to-face communication, talking on the telephone and emailing.  Generation X are those born between 1965 and 1979.  They communicate using mobile phones, email and IM.

The Net Generation are those born between in the 1980s and early 1990s.  Both my son and daughter fall into this category and this name recognizes the impact of the internet in the lives of those born between those years.  The education of my two children, especially their secondary education, has been dominated by the internet - they consume online media for hours every day - according to studies this generation is using media for more than 20 hours each day - though this is a total amount based on all the media they are using - often simultaneously - which shows how much they are multi-tasking.  In fact studies report older teens aged 16 - 18 like my daughter can multi-task up to 7 different things at the same time - almost twice as much as can be done by the Baby Boomers like myself!  As well as consuming media they also produce it - on social media sites such as Facebook and YouTube.  They Skype, IM and above all else they text.  The iGeneration are those born since the mid-1990s and who have been most heavily influenced by mobile technology.   Our son, born in 1991, got a mobile phone when he was nearly 14.  Our daughter, born in 1993, got hers when she was 11 but these were the first mobile devices they had.  Now I even see toddlers and pre-school children playing with iPads and iPhones - their whole world is mobile.

Our schools are now filled with the Net Generation (secondary) and the iGeneration (primary).  They are used to consuming and producing media and are great at multi-tasking.  They are social, connective and creative.  They write more than any previous generation and read more too.  Online they are highly motivated, though this doesn't always carry forward into the non-mobile classroom.  Clearly, looking at the new generation of students, there is a need to change our teaching in order to best meet their preferred learning and communication styles.

Posted by Maggie Hos-McGrane at 1:24 AM