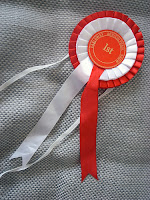 I don't attend the assemblies at school as I'm always teaching while they are taking place, but I was at a meeting earlier this year when it was announced that there was to be a new awards system and that each week a teacher could nominate a student in the class to receive a certificate that would be handed out by the Head of School during the weekly assemblies.  I believe the idea is that a different child from the class receives an award each week, so that during the course of the year every child receives an award for something.  Specialist teachers who want to give out an award therefore have to liaise with the homeroom teacher to find out if the child in question has already received one for something else.

The reason for this award system is that the school believes that students respond well to positive reinforcement.  It seems ironic then, that the first book chosen for the school's professional book group is Punished By Rewards by Alfie Kohn which, in the first few chapters that I've read, seems to be saying totally the opposite.  Kohn writes about the assumption that when a reward or reinforcement follows a behavior, that the behavior is likely to be repeated.  His conclusions are somewhat different - he writes that while manipulating students with incentives such as stickers, stars, certificates, awards, trophies and grades may seem to work in the short-term, it is a strategy that ultimately fails and even does lasting harm.  Kohn's studies are similar to those of Daniel Pink, and show that people actually do inferior work when they are enticed with rewards and other incentives - in fact the more we use artificial incentives to motivate students, the more they lose interest in what they are doing:  "Rewards turn play into work and work into drudgery".

In Chapter 1 of Punished by Rewards, Kohn also refers to the carrot-and-stick approach for teachers.  He challenges the theory behind performance-based pay:  "promise educators pay raises for success or threaten their job security for failure ... and it is assumed that educational excellence will follow."  In Chapter 2 he develops his argument by questioning what constitutes deservingness:


Do we reward on the basis of how much effort is expended?  What if the result of hard work is failure?  Does it make more sense, then, to reward on the basis of success?  But "do well" by whose standard?  And who is responsible for the success?  Excellence is often the product of cooperation and even individual achievement typically is built on the work of other people's earlier efforts.  So who "deserves" the reward when lots of people had a hand in the performance?

When we reward students and teachers by giving them awards, including money, we are assuming that they would not choose to act this way on their own, that they would not choose responsible action, that the love of learning is not enough, that they don't already desire to do good work.  Kohn argues that rewards and punishments are just two sides of the same coin - and that coin is all about one person controlling or manipulating another.  He writes that rewards are simply "control through seduction rather than by force" and that they are similar to punishments in that they are "used to pressure people to do things that they would not freely do".  He goes further by stating:


All rewards, by virtue of being rewards, are not attempts to influence or persuade or solve problems together, but simply to control.

The use of rewards is simply to benefit the more powerful party (the rewarder), yet they are justified by saying they are in the interest of those receiving the rewards.  There are some strong words here:


Behaviorism is fundamentally a means of controlling people, it is by its nature inimical to democracy, critical questioning, and the free exchange of ideas among equal participants.

I'm interested to know what other schools and other teachers do with awards and rewards and I'm curious to read on to Chapter 3 to find out more.

Photo Credit:  First by The Croft

Posted by Maggie Hos-McGrane at 11:17 PM