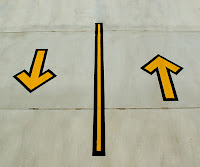 I was reading a chapter entitled "Present Tense and Future Tensions" from Literacy 2.0 today and I liked the way the digital divide was described.

Posted by Maggie Hos-McGrane at 3:10 AM